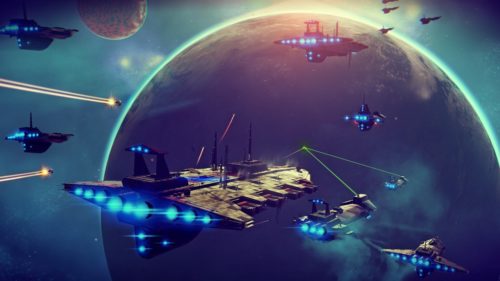 After what seemed like forever, I burst through the atmosphere of the planet and find a suitable place to land. By suitable, I didn’t really know what I was looking for, so I was only interested in a flat surface. As soon as I landed, I made the mistake of immediately getting out of the spaceship to stretch my legs.

I was immediately attacked by a swarm of tiny creatures. There were at least 5 of them. They looked like bugs or crabs or something. Their movement was frightening and what was worse is that my Mining Beam doesn’t seem to faze them at all. I quickly jumped into the Spaceship. They didn’t seem to want to attack the ship, but they wanted to attack me so they hung around the ship. I considered taking off again but I didn’t have enough Plutonium to do so. What was I going to do?!

I turned to the resources I had at hand. First I looked to my Ship but the Photon Beam controls don’t seem to respond when landed. My suit does have a shield but it didn’t do much against the creatures last time. I could try and out run them but they scurry really fast and there could be even more of them out there.

I checked my Multi-Tool to see why the Mining Beam didn’t harm them. It was fully charged and should have at least hurt them. However, it tells me I have to slots remaining to install new technology. And as luck would have it, I have a Blueprint for an upgrade called a “Boltcaster”. After checking the materials at hand I had just enough to build one.

Armed with my new Boltcaster I slowly creeped out of the Ship. I used my Jetpack to climb up on top where they couldn’t reach me and fired away. It got a workout! At least 5 creatures swarmed the ship and attacked me. It was all I could do to defend myself from them by standing on top of the ship and picking them off one by one. I’m not going down this easily. I shot at the ones nearby until I couldn’t hear them anymore and I was sure there were no more around me.

Looking forward across a vast ocean I could see the objective I was looking for: an item to enable warp speed travel! However, with low Plutonium levels, I will need to make the journey on foot, -rather by swimming. After swimming for what seemed like days, I encountered even stranger wildlife that was the largest I’ve seen yet. A great majestic beast similar to that of a triceratops.

The Visor told me they were Carnivores so I made sure to stay far away and only admire them through the zooming function on the Visor.

As strange as the wildlife was, I continued to encounter more of these strange stones which imparted me with knowledge of the language the Aliens were speaking. I have also found various shelters here all abandoned without a single lifeform inside. No signs of a struggle but clearly once inhabited. I can obtain some units and items from these houses, although it does not feel right, but I have to ensure survival at this point. I am sure there are no signs of lifeforms so I can rationalize to myself that it is OK. Still, I wonder what all these abandoned locations could mean? What happened to the lifeforms that lived here? Surrounded by natural resources it seems an ideal spot to live. Lots of Carbon (C), (do Aliens use that to breathe? I don’t know.) Platinum (Pt), and Copper (Cu).

Perhaps one day I can find someone who might know about this planet. Although I’m not so sure. Frequently, I hear ships fly overhead but all of them seem to be heading to some other destination. The vastness of this universe has really set in and I wonder again how I ended up here in the first place? How far am I from the Milky Way? The only home I ever knew. My wandering mind was quickly jarred by some large deposits of Platinum (Pt). I know it will fetch a nice price at the Intergalactic Trade Station so I fill up my Exo-Suit inventory with as much as I can carry and then swim the long journey back to the ship.

On the way, I encountered a small shelter with an Alien that pointed at my Multi-Tool. It seemed like it wanted me to take it off. Hesitantly, I handed the item over. The Aliens I have encountered thus far have not been hostile. There is no room for fear if I am to make it home and these Aliens are the only allies I have and my only shot at potentially ever making it home. Luckily, I was rewarded for my trust with a brand-new Multi-Tool from the lifeform. I thanked the lifeform and attempted to ask about the planet before leaving, but with the language barrier the limits we could do at this point were to trade and barter for items. So I parted ways, humbly thanked him (or her?) again, and began swimming through the vast ocean back to the ship. On the way back I took a much more direct and hasty path to the ship. The hostile wildlife is quite dangerous and I don’t want to have to fight any more of these creatures.

The Exo-suit seems like it is equipped to also function underwater. I don’t know how to swim very well so I probably won’t be using that feature unless I have to. However, it does allow me to stay underwater for a bit of time. Doing so allowed me to catalog some non-hostile underwater fauna. These are the only creatures on the planet that haven’t attacked me thus far.

Finally, I returned to the ship and crafted the necessary items to leave this deadly planet. Thankful I’m leaving with my life.

Powered by U3 Framework